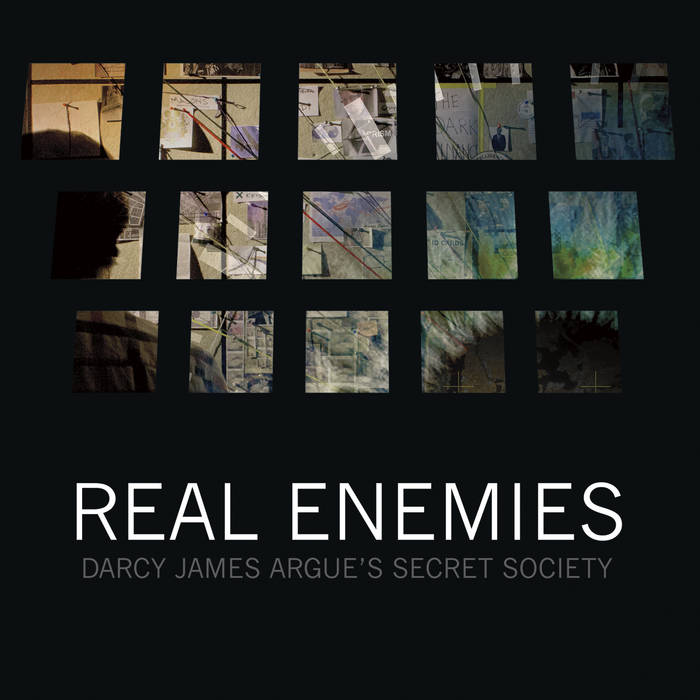 Ted Curry Incredible record. The Bari sax solo on Trust No One is the highlight for me on this stellar album. Favorite track: Trust No One.

Lucky Is Our Doggy

Real Enemies debuted as a multimedia performance (co-created by Argue with writer/director Isaac Butler and filmmaker Peter Nigrini) to impressive acclaim at BAM’s 2015 Next Wave Festival. Taking its title from Kathryn Olmsted’s 2009 book Real Enemies: Conspiracy Theories and American Democracy, World War I to 9/11, the project is the product of extensive research into a broad range of conspiracies, from the familiar and well-documented to the speculative to the outlandish. Real Enemies traces the historical roots, iconography, and language of conspiracies, and examines conspiratorial thinking as a distinct political ideology. It chronicles a shadow history of postwar America, touching on everything from COINTELPRO to the the CIA-Contra cocaine trafficking ring to secret weather control machines to reptilian shape-shifters from Alpha Draconis infiltrating our government at the highest level. Real Enemies invites the listener to explore and engage with the conspiratorial mindset. Argue explains:

“Belief in conspiracies is one of the defining aspects of modern culture. It transcends political, economic, and other divides. Conservative or liberal, rich or poor, across all races and backgrounds there exists a conspiratorial strain of thought that believes there are forces secretly plotting against us. Conspiracy theories often take hold because they provide an explanation for disturbing realities. They tell a story about why the world is the way it is. Paradoxically, it’s often more comforting to believe that bad things happen because they are part of a hidden agenda than it is to believe that they came about as a result of mistakes, ineptitude, or random chance.”

As befitting a journey into postwar paranoia, Real Enemies draws heavily on 12-tone techniques, a compositional system based on a tone rows — a sequence of all 12 pitches in the chromatic scale — devised by Arnold Schoenberg in the aftermath of World War I and embraced by American composers during the conspiracy-rich postwar era. However, Argue’s wide-ranging score exhibits a mischievous disregard for how those techniques have been traditionally deployed. Other musical touchstones include the paranoia-inducing film scores of Michael Small (The Parallax View) and David Shire (All The President’s Men), the revolutionary songs of Nicaraguan singer-songwriter Luis Enrique Mejía Godoy, the psychedelic space-jazz of Sun Ra, the FM synth-fueled grooves of early 1980’s LA electro funk-influenced hip hop, and much more. Significant pieces of spoken text from figures like JFK, Frank Church, George H. W. Bush, and Dick Cheney are expertly woven throughout the robust and provocative score, with a concluding voice-over narration provided by actor James Urbaniak. Real Enemies is an intense musical and sensory experience that spins and explores a web of paranoia and distrust, and resonates long after its last note.

James Urbaniak - narrator on "Who Do You Trust?" and "You Are Here" reprise
Darcy James Argue - composer, conductor