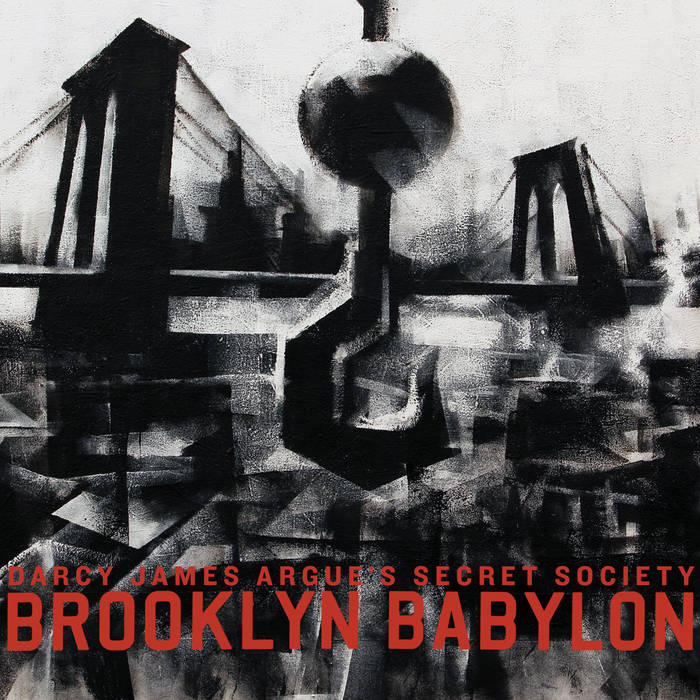 gamedesignerben I got to see this performed live at BAM with the muralist accompaniment, but even without the live component, this is a potent bottle of the Secret Society.

Weaving together progressive jazz, early-American popular styles, Balkan folk musics, and the sounds of Brooklyn's diverse contemporary music scene — from the dance-punk of LCD Soundsystem and experimental indie rock of Dirty Projectors to Missy Mazzoli's blend of post-rock and quirky minimalism — Argue creates a vividly evocative musical narrative that is at once timeless and unlike anything heard before. Argue's Secret Society is one of the most admired ensembles in contemporary jazz, having toured in Europe, Brazil, and North America and been twice featured at the Newport Jazz Festival. Its members include in-demand instrumentalists such as John Ellis, Ingrid Jensen, Ryan Keberle, and Sam Sadigursky.

Brooklyn Babylon was conceived in collaboration with Croatian-born visual artist Danijel Zezelj, whose narrative inspired Argue's mash-up of musical styles. Zezelj's artwork places the action in a larger-than-life, mythic Brooklyn, where past, present, and future coexist. Plans are afoot to construct an immense tower — the tallest in the world — right in the heart of the city. Lev Bezdomni, a master carpenter, finds himself torn between his personal ambition and his allegiance to the community when he is commissioned to build the carousel that will crown it.

Premiered to wide acclaim at the Brooklyn Academy of Music's Next Wave Festival in 2011, Brooklyn Babylon is a long-form, structurally-integrated work combining Zezelj's animation and live painting with Argue's music. But like great stage works, such as Stravinksy's Petrushka or Debussy's Jeux, the composition works powerfully on its own.

The 53-minute work shows Argue taking a novelistic approach to long-form composition: a prologue, eight chapters separated by brief interludes, and an epilogue. The album opens with the actual sounds of Brooklyn — a sonic collage of recordings of the borough captured on Argue's portable digital recorder. The ensemble gradually comes into focus and introduces the Prologue, from which every subsequent musical theme in Brooklyn Babylon derives. Argue reconfigures these themes using a broad array of techniques, inflected by contemporary indie rock, classical music, and jazz, particularly from the often maligned 1970s: the earthy avant-garde of Dewey Redman and Lester Bowie; the intricate large-ensemble sounds of Thad Jones and Don Ellis; and the sophisticated populism of Donald Byrd and Herbie Hancock's Headhunters. Waltzes, marches and — naturally — fairground carousels also fold into the mix.

A limited-edition hardcover graphic novel by Danjiel Zezelj, entitled Babilon, will be available in conjunction with the release. This work contains over 100 pages of brand new black and white illustrations, bringing the story of Brooklyn Babylon to a new medium. Babilon will be published by Zagreb-based publisher Petikat.

"Fantastic… a massive, brass-heavy, sax-buoyant sound moves out of the group
like a living wall." — Helen Shaw, Time Out New York

"Puts the composer and his 18-piece big band, Secret Society,
on the verge of a quantum leap." — Fred Kaplan, Stereophile